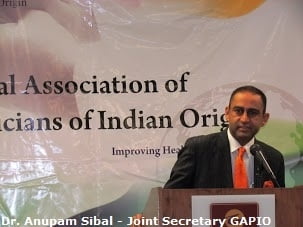 The conference started with Executive Committee meeting and followed with a reception dinner on 5th July. Dr. Sean Nikarwan made presentation on “Diabetes with Analog Treatment”.
During the meeting Executive Committee has constituted four awards to encourage members and coordinators for enrolling new members:

These awards will be given during the Annual conference of GAPIO at Kolkata.
On second day, the opening session of General Body meeting started with welcome address by Dr. Sanku Rao. Secretary General Dr. Ramesh Mehta read the minutes of the previous General Body meeting held at Cochin and placed the audited accounts before the members which were unanimously approved. Secretary General also presented his report by making a presentation.

GAPIO times issue II, a news letter of Global Association of Physicians of Indian Origin was released on this occasion. We shall be very shortly sending the news letter to all GAPIO members.

General Body meeting was followed by President’s reception and entertainment program by Geetanjali Group. Dr. Prem S. Reddy was the Chief Guest on this occasion.