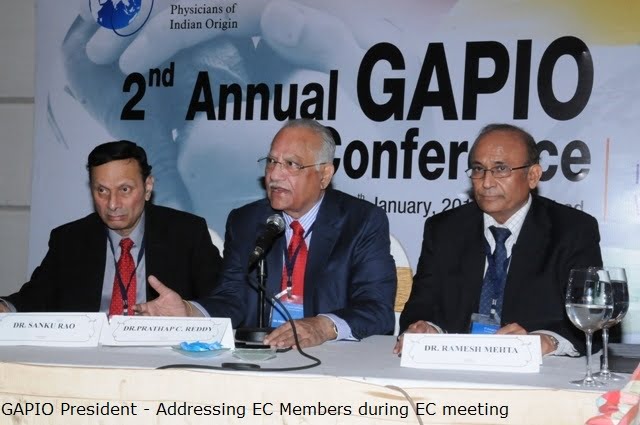 On the global healthcare map, physicians of Indian origin have carved a niche for themselves and their contributions in affordable good quality healthcare continue to win laurels all over. Cutting across boundaries, their expertise and commitment have been well acknowledged and appreciated by both patients and administrations in different countries, small and big, both developing nations and super powers.

Set up as a platform to be shared by physicians of Indian origin from across the globe, the Global Association of Physicians of Indian Origins (GAPIO) is holding its second edition of the Annual Conference in the city of Hyderabad on January 4 and 5 at Taj Krishna. The conference attended by participants from all parts of the world was inaugurated today by Dr. Prathap C. Reddy, President, GAPIO & Chairman, Apollo Hospitals Group, Dr. Sanku Rao, Vice-President, GAPIO & Consultant Gastroenterologist, USA and Dr. Ramesh Mehta, Secretary General, GAPIO & Consultant Pediatrician, UK.

According to estimates, more than 1.2 million Indian origin physicians are actively rendering service across the world including India, and of them, 1,25,500 are working in USA, UK, Australia and Canada. Given their presence and the spread, the physicians constitute a valuable resource which can contribute significantly in developments related with health field at global level.

The aim and purpose behind GAPIO is to act as a common, powerful and professional platform of Indian origin doctors and be able to usher in greater visibility and cohesiveness amongst the Indian medical community to help shape healthcare in underserved areas and ensure quality healthcare and affordable access for all. A beginning was made with the first and inaugural conference held in New Delhi last year.

Taking the initiative further, the present conference will have over 100 key opinion leaders from across the world, and concurrent topics on varying issues that range from Research, Education and Healthcare Policy to Application of Health Information Technology and Global Health are slated for discussion. Six scientific sessions on Women and Child Health, Cardiovascular diseases, Diabetes, Oncology and Mental Health and Surgery also form part of the proceedings during these two days.

Speaking on the occasion, Dr. Prathap C Reddy, President, GAPIO, said, “Establishing itself as an association of the Indian medical diaspora, GAPIO is marching ahead to impact global healthcare that is bound to influence the coming times. The moment has arrived for the Indian doctor to take a lead in shaping the contours of global health scenario”. The diaspora being in such vast numbers and given their wide experience in different countries and populace, the process of sharing and learning between them could act as a key milestone in Indian healthcare sector development too, he said.

Said Dr. Sanku Rao, Vice-President, GAPIO, “The collective experience of our members is immense, precious and powerful and from the common platform of GAPIO, we intend to use the same and reach out healthcare to areas that remained unserved. At the same time, the association also remains rooted to the concept of healthcare for all, especially in India”.

The merit of Indian doctor has been approved, expertise acknowledged and commitment  accoladed not only in the country but all over the world. “Given the leadership that our doctors command in health sector, the GAPIO function as a platform to empower Physicians of Indian Origin raise their bar at international level and also be able to leverage with policy makers on challenges faced by the healthcare system in India and across the globe,” said Dr Ramesh Mehta, Secretary General, GAPIO.