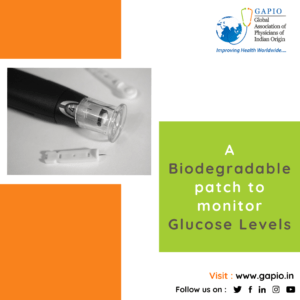 India is the country with the highest number of diabetics. India is deemed as the World’s capital of diabetes. The diabetic population in the country is close to hitting the alarming mark of 69.9 million by 2025 and 80 million by 2030.

The diabetics need to monitor the blood sugar levels at regular intervals. Most of them prefer the use of blood glucose monitor devices (glucometers). This device makes use of testing strips made with plastic and coated with a conducting material and one end of it contains chemicals. The patient needs to prick his finger with a lancet, insert the testing strip in the glucometer and then squeeze a drop of blood onto the collecting part of the strip. The end coated with chemicals absorbs the blood and computes the sugar levels in the form of signals which are sent to the glucometer which displays the readings on the screen. The problem with this existing setup is that the strips are one-time use and are made up of plastic. Thus they need to be disposed of after use. This increases medical waste by a huge number.

To address the issue of traditional glucometers and strips, a biodegradable patch is devised to monitor glucose levels. It is a cellulose derivative based-polymer, which uses sweat to detect levels of glucose and alcohol in the body. This transparent polymer is a non-invasive, wearable sensor that can be connected to a smartwatch. It can then track the concentration of glucose and alcohol in the sweat and can alert the user. According to the researchers, the lowest detection limit found for glucose is 0.4 millimolar (mM), while that for ethanol (or alcohol) is 0.34 mM.

It also overcomes the issue related to the needles used for pricking while using a glucometer. Needless to say that pricking carries a  risk of transmitting infectious diseases like HIV if they are not properly sterilized.

Also, the cellulose material used in this is available at a low cost, and it completely biodegradable in almost 15-20 days thus making it a better choice over the glucometers.

Consult your doctor for an expert opinion.