Dr. Vivek Murthy: An Indian origin Doctor who is the 21st Surgeon General of the United States

Home/Indian Origin Doctors in important positions world/Dr. Vivek Murthy: An Indian origin Doctor who is the 21st Surgeon General of the United States
Previous Next

Dr. Vivek Murthy: An Indian origin Doctor who is the 21st Surgeon General of the United States 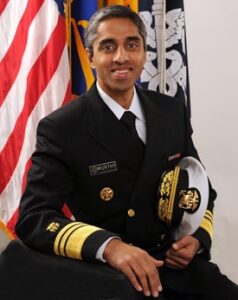 Dr. Vivek H. Murthy served as the 19th Surgeon General of the United States from December 15, 2014, to April 21, 2017. He was the first Indian – American to hold this post. During his tenure as Surgeon General, he tackled the most urgent health issues in the USA like addiction, the opioid epidemic, health risks of e-cigarettes. He also launched efforts to increase physical activity in communities across the country by promoting walking and exercise. He has also focused on chronic stress and isolation as prevalent problems that have profound implications for health, productivity, and happiness. He also commanded a uniformed service of 6,600 public health officers, serving the most underserved and vulnerable populations in over 800 locations domestically and abroad. He worked with thousands of Commissioned Corps officers to strengthen the Corps and protect the nation from Ebola and Zika and to respond to the Flint water crisis, major hurricanes, and frequent health care shortages in rural communities.

Besides being the Surgeon General, he also has the following accomplishments to his name