The Global Association of Physicians of Indian Origin (GAPIO) in collaboration with the American Society of Indian Plastic Surgeons (ASIPS) and Apollo Hospitals Group organized a free Plastic and Reconstructive Surgery Camp from 10th – 13th January 2013 at Apollo Hospitals Bilaspur. 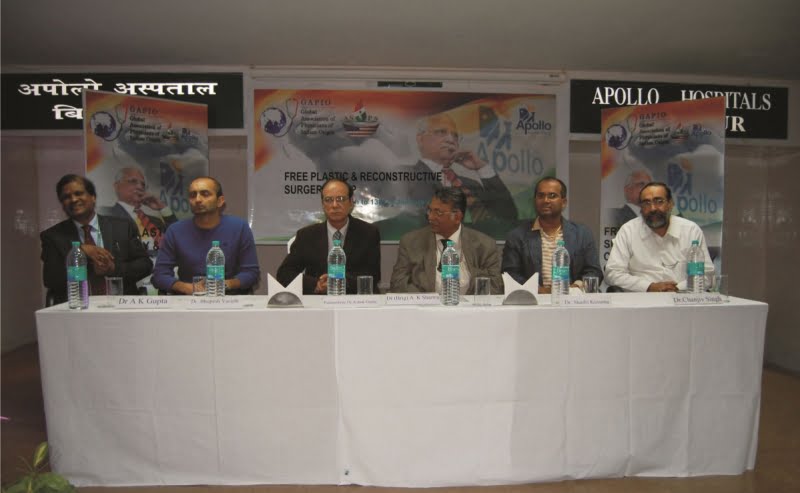 Over 300 patients registered for the camp and 105 were selected for surgery after screening. A widespread campaign was held involving government and non-government organizations to invite registrations. Pre surgery screening sessions were held in November and December and a final screening was done by the surgeons from ASIPS on 9th January.

The formal inauguration of this camp was done on 9th January by Dr. Ashok Gupta, Plastic Surgeon and member of Governing Body of the Medical Council of India.

The operating team consisted of plastic surgeons, anaesthetists, nurses and technicians from the US and India.The six doctors who had done the surgeries are members of the Global Association of Physicians of Indian Origin (GAPIO) and provided their services free of cost.

All necessary infection control protocols were observed and excellent postoperative care was provided to all the patients by the Apollo Bilaspur team. The dietary needs of the patients as well as their attendants were taken care of.

Honorable Health Minister of State, Shri Amar Agrawal visited the camp on 11th January and met the operated patients. He commended the efforts of GAPIO, ASIPS and Apollo Hospitals.
All 105 patients have been discharged with requisite discharge and emergency instructions. No money was charged from any patient.

Follow up of the patients was done by surgeons from Apollo Bilaspur and a final follow up was done by Dr. Chanjiv Singh, Coordinator ASIPS in India, on the 27th January.

Two pre camp press conferences and a post camp press release were widely covered by the print and electronic media.

Global Association of Physicians of Indian origin has committed to donate Rs.1000/- per surgery.
Some photographs of the event are highlighted below:

Will be updated soon